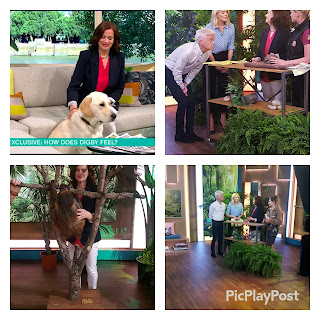 Last week, I had the honor of being in the UK on a morning television show there called This Morning. I had the chance to talk to a skunk named Flash, an armadillo named Flo and a sloth named Talita. After that, they decided it would be fun for me to connect with their studio dog named Digby.

There was possibly a Meerkat or Owl that was to come, but they did not. I know that the animals that did come to the studio that day, had an agreement (bigger picture) to show people who they are and what they wanted to express. The studio had changed the lighting and other things in the environment to accommodate Talita, the sloth. Great care was taken to assure the safety and protection of each animal. I've had to come to terms, with the help of the animals, actually regarding my feelings about zoos. The animals tell me that they have chosen to come back and be in this environment so humans can see them and learn about their species. A karmic contract, so to speak. Things have changed a lot from when I was a child and most zoos are more spacious and have much better conditions that they used to. So again, they are representatives, so to speak for their particular species.

I had never fed or pet a sloth before. Not only was she beautiful, she was very spiritual and profound. She said that being gentle and sweet does not mean your weak. She wanted to really make sure people knew about love and kindness. She was simply amazing.

I was able to spend some time with Flo, the armadillo, before going on air. I asked her handler if she had anything she wanted to know from Flo. She did want to know if she wanted another baby. Flo said no, not now. She also said she wanted to try a new 'husband', which was shocking to her handler. Flo said, she just wanted to check out someone new, but if it wasn't good, she wanted to go back to Tank, her current 'husband'. Oh my!

Flash the skunk was a younger skunk. He just talked about adventure and that people think too much and that everyone needs to play more. He even told one of the hosts that they needed to play more! I really loved his funny and light energy.

So, I thought I was done at this point, as we talked about the animals that I would be connecting to, etc., prior to me being on air. So, after I spoke with Talita, I went off stage and asked who would be taking my sound pack off, etc. At that point, one of the producers came up to me and asked if I had time, would I be able to talk with the studio dog. (I'm thinking, hmmm, I'm here in London, leaving in about 5 hours, yes, I have time!!). So, I said, of course, I'd love to, so they brought me over to  different set up and brought up Digby. I met him in the 'green room', before going on air, and he was just hanging out being admired and pet. So he basically said how he loved attention and being admired. They asked if he liked his training he said, well, it's okay, but not all the time. He would much prefer not to work, haha!

I then was whisked off, sound pack taken off, and led back downstairs to be told my car was waiting for me for the airport. I asked if I could change first, so I did, then went to the airport.

I had several hours before my plane was to leave. So, I found a restaurant that looked good. I sat down next to a woman who was traveling by herself as well. We struck up a conversation that was one of those Divine moments. She and I just clicked right away, she pulled out these spiritual books in her bag. I had to tell her about my husband's new book (How to Get to Heaven, without Really Dying). She just heard Anita Morjani's podcast, and I mentioned how she endorsed my husbands' book! It just went on and on like this. Not a co incidence of course. We actually connected while she was in the States.

Life is full of amazing opportunities. When they are presented to you, take them. Even if you may be fearful, do it any way!

Being flown to London, to chat with these amazing animals was really a dream come true. Thank you to This Morning UK for having me!
Posted by Sue Pike, The Animal Talker® at 4:47 AM